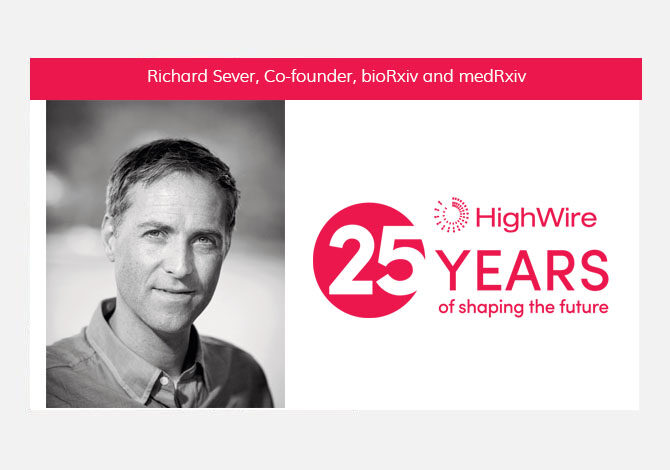 We sat down with Richard Sever – co-founder of bioRxiv and medRxiv – to talk about how Cold Spring Harbor leveraged HighWire’s submissions technology to create the leading preprint servers, and the changes being driven by preprints in a post-pandemic world.

Richard: I first encountered HighWire when working as an editor at the Journal of Cell Science back in 1999. The journal was self-publishing content online, really just putting up PDFs. It was becoming increasingly apparent, however, that people were experimenting more with online publishing and things were going to change significantly. To be a part of this major transition, we would need to go beyond the PDF. What was needed was a new electronic submission system to handle complex journal workflows and a state-of-the-art display side for HTML and images.

Around this time, a number of other non-profits—both small and large—were partnering with HighWire to enable their shift to digital, and I floated the idea of speaking with them about their capabilities. We spent an exciting 48 hours flying out to Palo Alto to meet with them and then straight back—one of those flights where you spend more time on the plane than you do on the ground! The HighWire team were really impressive, and it became clear that they could do a lot of things we would simply not be able to do in-house. That was the beginning of a long relationship between HighWire and Company of Biologists, and we began using the Benchpress submissions system to manage our manuscript submissions process.

It was an exciting time in academic publishing, and one of the great things about being part of the HighWire community at the turn of the millennium was that there was this huge digital explosion going on. HighWire’s annual meetings were some of the most exciting events in the calendar; there was a really unique mix of technologists and publishing folk there. I remember people like Tony Delamothe from BMJ coming onto the stage playing I Fought the Law by The Clash to talk about Napster and whether this type of model posed a threat for scholarly publishing; Kent Anderson (founder of The Scholarly Kitchen) giving a talk using a Palm Treo device long before anyone had a smart phone; and Anurag Acharya (co-founder of Google Scholar) roaming about the stage telling the gathered masses what information dissemination was going to look like in the future. The Web was still relatively new at that point, and of course we always had the umbilical cord of the ethernet cable. Then we started talking about wireless, and imagining a future where people could sit comfortably in their gardens downloading scientific papers.

Not only was there the buzz of being embedded in the technology start-up culture around Stanford campus, but there was also a real openness and honesty to those early meetings. Everyone was experimenting in different ways, so it was always fascinating to see what other publishers had tried, what had succeeded, and what had failed miserably. That sharing of knowledge could be a huge time-saver: being able to see what was being trialed at Science, PNAS, BMJ, and Cold Spring Harbor.

10 years later I ended up working at Cold Spring Harbor myself, and continuing my relationship with HighWire from a new perspective. The arXiv preprint server for physics had launched in 1991, and my colleague John Inglis and I had often talked about whether we could do something similar for biology. I remember saying we could put together some of HighWire’s existing components, adapt them in certain ways and build something that would function as a really effective preprint server—and that’s what we did, launching bioRxiv in 2013. It was great then to be able to take that experiment to HighWire meetings to report back on. Initially there was quite a bit of skepticism from the community, who thought there were cultural barriers that meant preprints wouldn’t work well for biology, but 7 years and almost 100,000 papers later it’s still there, and still being served very well by HighWire.

When we launched bioRxiv we made it very explicit that we would not take clinical work, or anything involving patients. But the exponential growth of submissions to bioRxiv demonstrated that there was a demand and a desire for this amongst the biomedical community, and people were beginning to suggest that a similar model be trialed for medicine. A tipping point for me was an OpEd in the New York Times (Don’t Delay News of Medical Breakthroughs, 2015) by Eric Topol (Scripps Research) and Harlan Krumholz (Yale University), who would go on to become a co-founder of medRxiv.

We dipped our toes into the water by accepting some epidemiology and registered clinical trials on bioRxiv, but there was an obvious need for a separate server with increased checks and balances in order to mitigate the potential risks accompanying dissemination of non-peer-reviewed medical papers. It became clear that colleagues at Cold Spring Harbor, Yale and BMJ were all thinking along the same lines. We decided to join forces, and used the success of bioRxiv as a blueprint to create medRxiv—a separate server for medical preprints with elevated levels of screening and extra safety measures. medRxiv launched last year. Little did we know that the COVID-19 pandemic lurked on the horizon.

The launch came just in time. We’d been operational for about six months; everything was set up, everything was working and all of our workflows were in order. Mid-way through January we got the first paper on what was then being called the Wuhan coronavirus. We’d had only a very small number of papers from China up until that point, and then we just saw this huge ramp up of papers, followed by papers coming in from Italy, from the United States, and then an absolute explosion of submissions as the disease became a global phenomenon. Monthly traffic for both medRxiv and bioRxiv was at 15M page views in March, up from a monthly average of 1M and 4M respectively—from our perspective, it was almost like we’d fast-forwarded seven years, and suddenly we were getting just as many papers on medRxiv as bioRxiv. 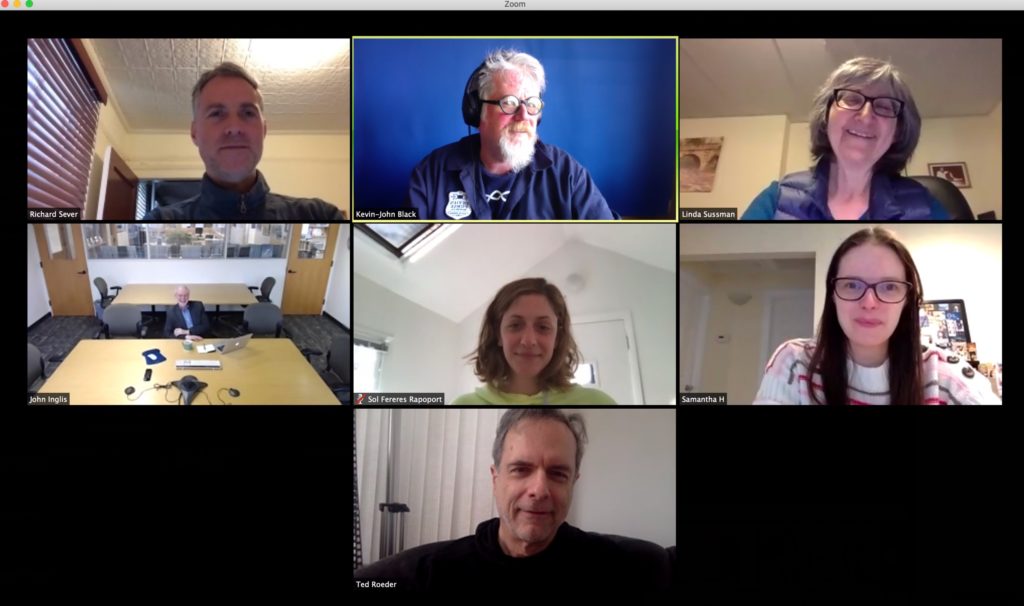 This huge growth in exposure brought new challenges. While our usual audience is academics—who know and understand the attendant risks of putting faith in a preprint—suddenly we had a much broader audience, including journalists, members of the public, and even bad-faith actors such as conspiracy theorists. So the question we had to ask ourselves was: are the criteria for what papers we accept in the midst of a pandemic the same as they would be ordinarily?

We adjusted some of our messaging to make it clear what a preprint does and does not provide, and took steps to highlight this even more prominently so that readers understood that papers had not been through peer review.

We also began turning away some papers where we thought disseminating them without them having been through peer review would be irresponsible: so papers with clickbait titles, potential conspiracy theory fuel and in silico predictions that could lead runs on over-the-counter medications were all on the decline list. In that sense, we did feel that it was our duty to act as a ‘responsible adult’ in the room.

Some dubious papers would obviously still be posted though: one big one was a controversial claim of similarity between HIV and COVID-19. However, what this case showed us was the scientific community immediately carrying out its own quality control: within 24 hours there were loads of comments exposing flaws in the methodology and findings of the paper, and by the end of one weekend the authors withdrew the paper. While some point to this as a risk of the preprint model, to my mind it was a fantastic example of self-correction among the academic community—and brought about a retraction far more quickly than it would happen in a peer-reviewed journal.

One of the big changes that preprints are driving is in decoupling the dissemination of the manuscript from its evaluation. So while many people worry about how to adapt business models for open access, this decoupling in many respects offers a huge opportunity. Moving evaluation downstream is an opportunity for publishers, but also for groups that want to become publishers or for new initiatives, whether driven by the community, by new technologies such as AI, or mixtures of both. We’re beginning to see some interesting experiments here—Prelights, eLife Preprint Review, Semantic Scholar, Review Commons–and we see bioRxiv and medRxiv as playing an important role in supporting and enabling those types of downstream evaluations. We already link out from articles to provide a wider context and perspective: to the final peer-reviewed version of the paper published in a journal of course, but also to discussions happening elsewhere, whether that’s on a blog, within the Twittersphere, or in a piece on Prelights. Ultimately we see bioRxiv and medRxiv acting as a hub that readers can use as a jumping-off point to discover all these other sources of evaluation and context. We’re watching that area closely and there’s a fertile ground for real evolution in publishing.

I definitely think scientific collaboration, early data sharing and the release of information as preprints is something that’s really come to the fore because of the COVID-19 pandemic. And there’s a real sense that people think this is a hugely positive thing, which could massively speed up how science is done: in a fast-moving field, if it takes 8-9 months for information to be released then that system of communications clearly isn’t fit for purpose. Being in this urgent situation that we’re all in together has really shown what can happen if release of information is expedited.

We all want to get to the post-pandemic world as soon as possible, we’re all rooting for a vaccine and new effective therapeutic approaches, but one thing that people want not to change is this real spirit of collective endeavor that’s been realized during this time. Scientific communication amid the pandemic can point the way forward to scientific communication beyond the pandemic.