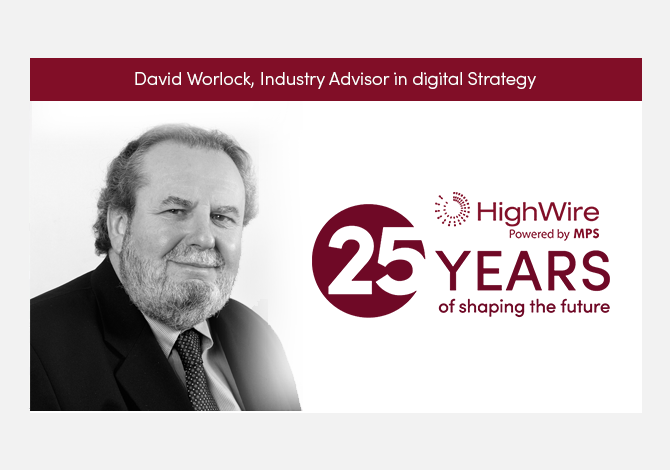 HighWire at 25: David Worlock looks back

In this blog post, industry-leading veteran David Worlock looks back at the last 25 years (and beyond….) in publishing, and considers the impact that the digital shift will continue to have on business models into the future.

Change always needs intermediation. The history of research and scholarship demonstrates this constantly. Practices that are at ﬁrst born of initial necessity become the habitual style which has in turn to be accommodated when technologies change. Monks who trudged across Europe to update copies of the manuscripts of Copernicus in distant monasteries with their own observations were succeeded by scholars whose work would appear in the exciting new medium of print. Nicholas Hill – preparing his ‘Epicurean’ of 1601, bringing Lucretius and his atomism into the seventeenth century scientiﬁc discussion – had his printer insert blank pages between text pages so that readers and friends like John Donne and Ben Jonson could add their annotations. Each technology needs facilitation and handmaidens. Fifty years after Hill come the Philosophical Transactions and the Sçavans: the ﬁrst science journals.

In 1995, year of HighWire’s foundation, we were all struggling with the inheritance of the ARPANET. Having been gifted the ability to interconnect research globally by the US Defense Department, and christened it the Internet, we could think of nothing better to do than dump into it all the science recorded since 1660. We sought to communicate what had already been communicated, and in the rush of mid-decade enthusiasm few saw the problems. But there were scholars and scientists and librarians at Stanford who did, and have provided 25 years of services and hosting and solutions to get us through some diﬃcult passages, ensuring that many smaller but highly valuable players could cope.

The task is not yet done and the future of intermediation and facilitation could indeed be the Future of Publishing. Following Nicholas Hill in 1601 comes Dan Whaley today with his hypothes.is venture, excitingly interconnecting the footnotes, comments and annotations to enable a research thought to be followed more eﬀectively. And after those heady days of digitalization of the mid 1990s we have come into a wholly diﬀerent ‘born digital’ world. We use the inadequate expression ‘digital transformation’ to describe what should, if done properly, end with a researcher-centric view of content. The research requirement to ﬁnd exactly the information required means (as it has always meant) that natural language searching, concept-based enquiry, semantic ﬁngerprinting, eﬀective ontologies and really top-class metadata are far more important than the redundant formats – ‘book’, ‘article’, ‘journal’ and the like – that we spend our lives discussing.

In 1995 my own company, Electronic Publishing Services (EPS), was ten years old, during which period we had been faced with nothing more challenging than commercializing dial-up databases, CD-ROM and Multimedia (said then to be the Future). We got our ﬁrst internet strategy job in 1993, and like the founders at HighWire we were working out a service business scenario. We, being no wiser, came up with the ‘Theory of Musical Chairs’. In this we postulated that the network eﬀect would force network participants to occupy the territory of the next player in the workﬂow newly connected by the network. Thus, we argued, authors would soon become (self) publishers; librarians would become super-publishers and hold the vital standards of content interoperability; publishers would evolve into maintenance engineers, tuning the tools which cross-searched the distributed content held locally in research repositories, and providing the software development and advances which would do much to create this ‘new’ science in a collaborative world.

The message that publishers were to be recreated as software services and solutions businesses did not resonate with our publisher clients, who, as one, took to the conference podia of the world to proclaim that ‘Content is King’. We had to wait for populist politicians for slogans to match that in emptiness. It disguised the reality of a user-centered networked world for a time – and what a boom time it was for scholarly communications publishers! But now that the boom is over and OA and Plan S all conspire in the direction of controlling margins, the true shape of a network future is beginning to emerge.

So what will the world look like in scholarly communications at HighWire’s 50th anniversary? Hating to waste a theory, I am clinging to Musical Chairs. At current rates of research output, we have already reached the point where the idea of a researcher reading all the current material published in their sector is becoming absurd. Mapping what is happening, knowing which peers are doing what, is already problematical for some. Knowing what results another team are achieving now (e.g. Morressier) may be more important than reviewing their published article in two years’ time. Searching on methodologies across multi-sourced content, or cross-referencing citations, could be critical. Since all content cannot be in one place, federated searching and the use of text and data mining across all available references becomes an imperative.

So we emerge into the world of AI. In fact of course it has been with us all along, changing its name from ‘Expert systems’ to ‘neural networks’ as a way of disguising the fact that it didn’t deliver to our wildest expectations. Now that it is finally beginning to deliver, it can shoulder many duties for scholarly research. All that peer-review reference checking and concept analysis, for example. But these are the foothills. It is when AI becomes the way that researchers read other people’s research that things really get interesting. Released from the time-consuming literature, researchers may be free to research and self-publish. But acts of self-publishing may simply be releasing formatted work into the network, or opening access to the network for a digital lab notebook. Imagine Jupyter notebooks of the future where colleagues and collaborators could see and annotate ﬁndings, or test reproducibility from the data available on board? As we move from Open Access to Open Science, overt acts of ‘publishing’ may become as rare as overt acts of textual reading. The minds of librarians (e.g. Hypergraph from Liberate Science) already lean in this direction.

Some major publishers anticipate these developments by acquiring software and services companies. Others think that a world born in 1660 will never change or decline.

Whoever is right, all these worlds will need support and services. Have a happy next 25 years, HighWire!